The Joyce Area Residents Association (JARA) is group of concerned residents and community members that have been pushing for more community-oriented and inclusive planning for the Joyce Station Precinct Review. The group has been working since November 2015 on engaging hundreds of residents, sitting down with the City of Vancouver planners and connecting with other housing justice experts and advocates.

We envision Renfrew-Collingwood as a working-class, multi-racial, and intergenerational community with affordable housing, small businesses, community spaces, and services that reflect the diverse needs and interests of local residents.

What has JARA accomplished so far?

We are proud of the work that we’ve done so far. It is always our goal to improve the ways that the City engages our low to middle income, immigrant, 73% ESL community. We have seen how our advocacy has led to additional information sessions and meetings to address specific concerns.

We are holding a JARA Community Meeting on Wednesday, April 27, 2016 at Collingwood Neighbourhood House at 6pm in Program Rooms A & B to discuss our next steps.

We need to keep working together so that our voices are heard by the City of Vancouver. Get in touch! JoyceareaRA@gmail.com Website: joyceareaRA.wordpress.com Twitter: @joyceareaRA 604-445-5300 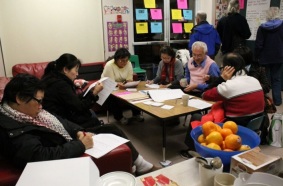 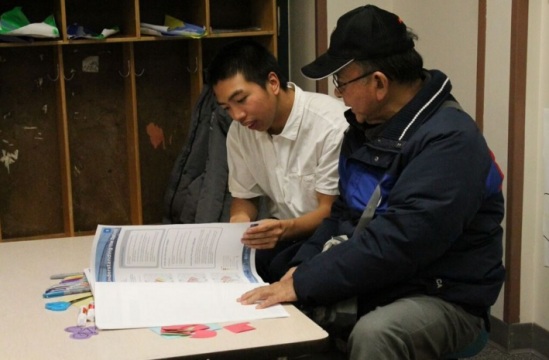 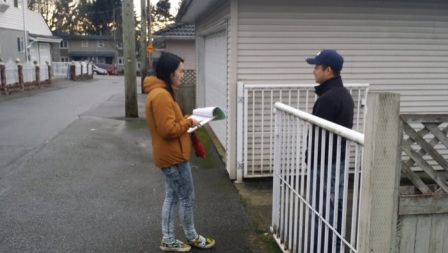 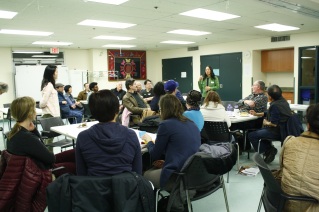 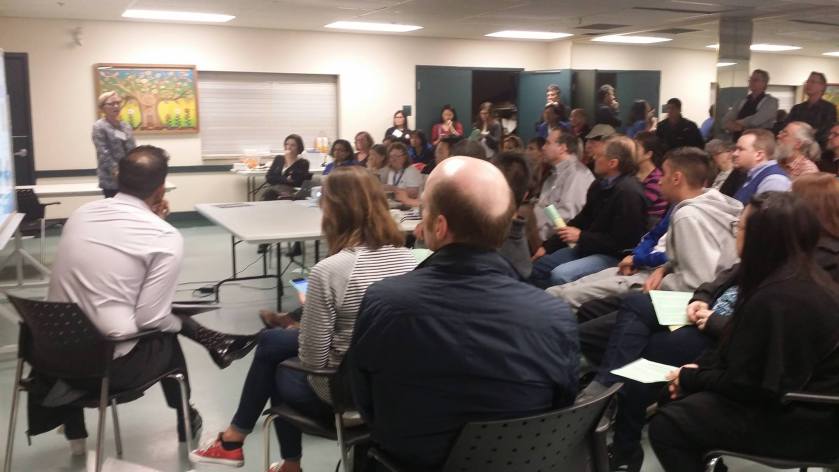 Here is a summary of the City workshop hosted on April 6, 2016 at Collingwood Neighbourhood House. City staff and representatives from St. Mary’s, BC Housing and the Parks Board met with residents to discuss the Joyce Station Precinct Review. Residents were invited to join discussions on Affordable Housing, Transportation & Pedestrian Connections, Amenities, Heights & Housing Options

It’s good to see the City engaging the community but we still have issues with the way its being done. It is clear from the other night that the plans should not go to City Council in June because we are still not being heard.

Below is a summary of the event with quotes from attendees and criticisms of the consultation process.

Following a powerpoint presentation by senior city planner, Paula Huber, the City allowed a very short Q&A. We were only given 5 minutes and 3 questions from the crowd. The large group of residents (around 70 people) seemed to all be on the same page as they nodded and encouraged their neighbours.

What attendees had to say about the process:

“Breaking into smaller groups right away is one way to diffuse group momentum and dissension.”

Traffic is still a major concern for residents, especially if the City is planning more density in our already crowded neighbourhood.

“The plan is for conventional width sidewalks of 5 -5.5 meters. We suggested much wider to open up more possibilities for performance, gathering, benches, cafe tables etc etc. We suggested asking the community what width of sidewalk they want.”

“Joyce cannot be widened, traffic will block up side streets. Seems there has been little thought to the Boundary Wall development and the traffic those buildings will create on Vanness and Joyce.”

We are still unclear on why or how heights were chosen for the towers proposed. The only reasons that the City provides are that they want the heights to gradually go from taller to shorter and they want to densify at the skytrain stations. JARA would like to see the evidence for the need to densify. Other experts have said that density increases are being used all around the city without hard evidence to prove the necessity.

“I asked whether families desired apartment living or prefer a broader range of choice and my question was not answered.”

The commitments to affordable housing are still unclear. While BC Housing and the City have finally started to communicate, one city planner, Matthew Burke, confirmed that there is NO TIMELINE to increase the units on the BC Housing site. JARA is asking for 20% social housing to be built into the policy statement, which is fairly standard in other neighbourhoods.

“The BC Housing representatives assured us that the Vanness Avenue site is not a priority for redevelopment in the foreseeable future as other sites have more need. Her opinion was, since the requirement for social housing will not be met in the planned Towers, that objective must/could be accomplished on the City Vanness Site.“

No Community Centre or Recreational Facilities

One resident raised the fact that no amenities were in the plan. Paula Huber and the City maintain that Renfrew and Killarney Community Centres (35+ minute walks for us) are good enough for our residents. The room disagreed. The City insists more people are coming to the Joyce Area. For this reason, we want a community centre with recreational facilities like a swimming pool and fitness gym.

There are still no clear amenities proposed by the City. Collingwood Neighbourhood House has been working on community amenity strategies for some time and would be a great resource for planners to connect with. There are still no cultural amenities. We would like a clear list of amenities to be built into the City’s policy statement and we want thorough community consultation for this process.

Short-term actions (What can I do now?):

We must delay the process until residents really feel that they have been heard and their ideas have been implemented into the plan that will go before the City Council.

Register online for this week’s Workshop with the City of Vancouver planners!

[UPDATE: After JARA began calling residents on the phone and registering them, we were able to fill all 70 spots!! If you are unable to make it but want to have a say, please e-mail paula.huber@vancouver.ca and joyceareaRA@gmail.com. Tell the City we need MORE casual sessions like this!]

JARA and community members have had a big win. The City will host two more information sessions to engage our community about the City’s plans for Joyce Station.

Modeled after our last successful JARA Community Dialogue, the City of Vancouver will host a workshop for residents on a variety of topics:

This is a great opportunity to have our questions answered on the spot by City staff. Please attend and bring your ideas and concerns. It is a positive sign to see the City working with us but we still need to ensure that decisions made with the community are built into the new plans.

There are 19 spots left [UPDATE: the event is now waitlist only]. Let’s keep pushing for genuine consultation and real commitments from city planners. Recognized as stakeholders by the City, JARA had a big hand in crafting these workshops.